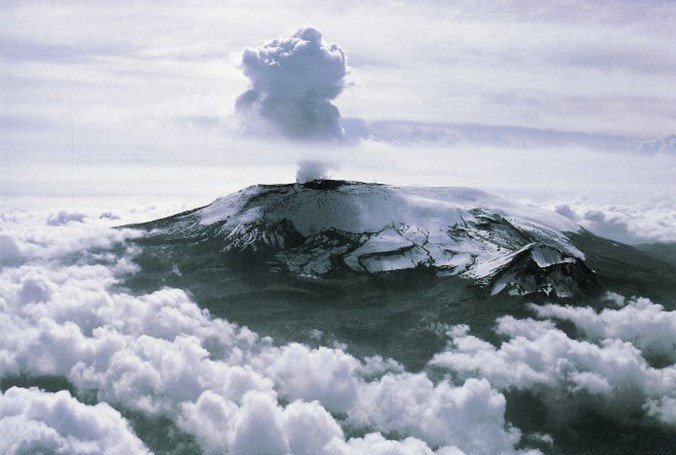 The Nevado del Ruiz, or Kumanday in the language of the local pre-Columbian indigenous people, is a volcano located on the border of the departments of Caldas and Tolima in Colombia, about 129 kilometres west of the capital city Bogotá.

The Nevado del Ruiz, or Kumanday is a stratovolcano, composed of many layers of lava alternating with hardened volcanic ash and other pyroclastic rocks. Nevado del Ruiz has been active for about two million years, since the Early Pleistocene or Late Pliocene, with three major eruptive periods.

The volcano usually generates Plinian eruptions, which produce swift-moving currents of hot gas and rock called pyroclastic flows. These eruptions often cause massive lahars (mud and debris flows), which pose a threat to human life and the environment. On November 13, 1985, a small eruption produced an enormous lahar that buried and destroyed the town of Armero in Tolima, causing an estimated 25,000 deaths. This event later became known as the Armero tragedy—the deadliest lahar in recorded history.

The volcano is part of Los Nevados National Natural Park, which also contains several other volcanoes. The summit of Nevado del Ruiz is covered by large glaciers.

Animals living on the volcano include the mountain tapir and spectacled bear, now designated as threatened,  the rufous-fronted parakeet, bearded helmetcrest, and Herveo plump toad, as well as the condor.