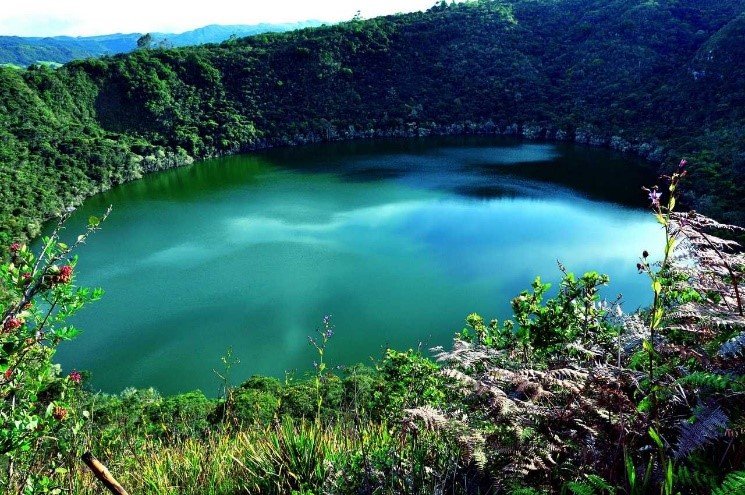 Lake Guatavita in the Andes is considered the real El Dorado.

Lake Guatavita (Spanish: Laguna de Guatavita or Lago Guatavita) is located in the Cordillera Oriental of the Colombian Andes in the municipality of Sesquilé, in the Almeidas Province, Cundinamarca department of Colombia, 57 kilometres (35 mi) north-east of Bogotá, capital of Colombia.

The lake is circular and has a surface area of 19.8 hectares.

Lake Guatavita was reputedly one of the sacred lakes of the Muisca, and a ritual conducted there is widely thought to be the basis for the legend of El Dorado, "the golden one". The legend says the lake is where the Muisca celebrated a ritual in which the zipa (named "El Dorado" by the conquistadors) was covered in gold dust, then venturing out into the water on a ceremonial raft made of rushes, he dived into the waters, washing off the gold. Afterward, trinkets, jewellery, and other precious offerings were thrown into the waters by worshipers. A few artefacts of gold and silver found at bottom hold proof to this claim; however, to date, attempts to drain the lake or salvage the gold have yielded no more than these.

The lake is now a focus of ecotourism, and its association with the legend of El Dorado is also a major attraction.