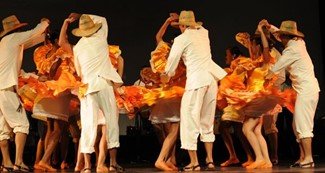 The Joropo is a musical style resembling the fandango, and an accompanying dance.

The Joropo has African, Native South American and European influences and originated in the plains called "Los Llanos" of Colombia. It is a fundamental genre of música criolla (creole music).

Formerly, the Spanish word joropo meant "a party", and in the 18th century the llaneros started using the word “joropo” instead of the word "fandango", which was the word used at the time for party and dance.